Chess is a highly competitive game that’s played by two people. It can get very complicated and complex – there are billions of potential combinations that can be made on the board. But the basis of the game is pretty simple and everyone can get to understand them in no time. So, how do you go about learning the game of chess?

Well, the chess board consists of 64 interchanging black and white rectangles. There are 32 pieces on the board at the beginning of the game. The two players hold 16 pieces each, all deployed at the opposite ends of the board. 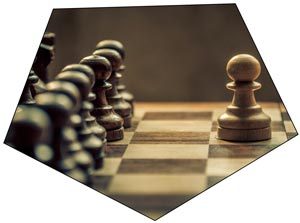 About the different boards

The king is the king!

The king is the unique piece of the game in that its value is infinite. If you lose your king – you have lost the game. The same goes for your opponent. The king moves one square in every direction. The fact that it’s a vulnerable piece and that it is hindered by lack of movement capabilities means that you should take care to protect it early on in the game. But at the end of the game, the king can turn into a powerful piece that you can use to win the game.

So, we have established that the goal of the game is to capture the king of your opponent while blocking the attempts of your opponent to take your own king. This can be done in many different ways – and this is exactly what makes the game of chess so exciting and rewarding. There are various strategies that you can implement in the game – there are attacking players, defensive players, risk-taking players, sacrifice-giving players – there are many different styles of playing chess.

How to master chess

But if you truly wish to master the game of chess then you will need to invest a lot of time and effort into it. It will take years before you will be able to get truly good at chess. And remember – losing is a part of the game. You will have to do away with your egotistical ideas about always winning at chess. There will be times when you will lose fair and square against various opponents. There will be times when you will make a blunder that will cost you the game. It’s important not to lose hope and to continue studying the intricacies of chess so that one day you can master the game.

← Important Rules of Chess
Ways to get better →